After seeing Chloe Grace Moretz in Matthew Vaughn's Kick-Ass, I'm fairly confident that she will be a kind of dominating presence in Matt Reeves' Let Me In, the hotly contested English-language remake to the much beloved 2007 Swedish pre-teen vampire film, Let the Right One In. 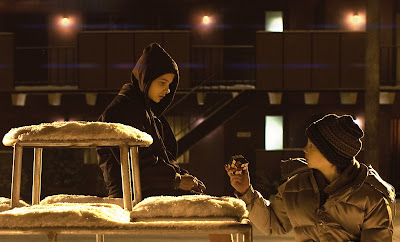 But the question is whether or not director Matt Reeves (Cloverfield) can spin a film as quietly chilling and uniquely provocative as Tomas Alfredson's and resist from turning the thing into a watered-down, loud and easy spookfest. If what I'm hearing from producer Simon Oakes is accurate, you can expect plenty of the latter.

Chloe Moretz notwithstanding, there's really no point in giving this thing a look - it's the perfect example of a film that simply doesn't need to be remade. The included screenshot is further proof, as it looks like a carbon copy of the exact same scene from Alfredson's original. Let Me In hits theaters on October 1, 2010.
Posted by Chase Kahn at 8:20 PM