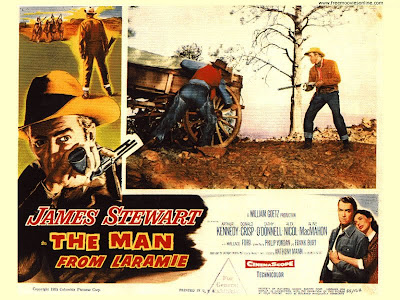 Anthony Mann's westerns are of a different breed - brooding, cathartic and lean, these films were influential in the development of the western as a tool for high-stakes sophisticated drama that had been absent from the genre since it became fashionable in the late 1930's with films like Stagecoach ('39), Dodge City ('39) and Jesse James ('39).

More readily identifiable were the collaborations between Mann and Jimmy Stewart, who teamed for five such westerns in the 50's beginning with Winchester '73 ('50) and ending with one their best, The Man From Laramie ('55).

As per usual, Stewart plays a lone gunman on a mission who gets caught up in a ruthless, testy conflict. Far from the well-mannered country boys he played throughout the 30's and 40's and the law-abiding men he would later play, Stewart's career was rejuvenated with these obsessive, on-edge performances - culminating into his role in Alfred Hitchcock's Vertigo ('58).

In The Man From Laramie, Stewart's Will Lockhart makes himself an unwanted guest in the town of Coronado when he tangles with Dave Waggoman (Alex Nicol) over the trivial pickings of a salt field, owned by Alec Waggoman (Donald Crisp), Dave's father, who dominates the landscape with sheer power and fear - the massive Barb Ranch.

Lockhart refuses to leave until he gets the money owed to him from the burning of a few wagons at the hands of Dave, but when he refuses to leave, the suspicions of the Coronado residents (specifically the Waggomans) as to the motives of "the man from Laramie" boil over.

The dry, flat widescreen vistas (shot by the prolific Charles Lang) give Laramie a distinctive flavor in contrast to the chilly mountain passes of The Far Country and the wet greens of The Naked Spur and Bend of the River.

As Alec Waggoman recounts a recurring dream to the titular mystical figure, in which he describes a man arriving to kill his son, the delicious irony is in the misplacement of his apprehension.

Lockhart will inevitably leave Coronado unscathed - his elusive quest simultaneously revealed and fulfilled - yet we get the impression that further scuffles and dark alleys await his unwavering persistence. Sadly, for Stewart and Mann, there would be no more Will Lockharts in their future. [A-]
Posted by Chase Kahn at 12:37 PM