Assault of the Synths

John Carpenter's taut, excellent low-budget thriller Assault on Precinct 13 ('76) is widely regarded as the director's homage to Howard Hawks' Rio Bravo ('59) in the way that it depicts an honest, upright cop (Austin Stoker) standing up to a lawless street gang to protect an innocent man. 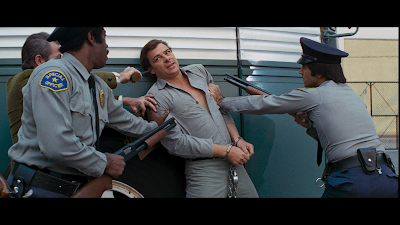 Of course, this is very similar to the way that John Wayne's Sheriff John T. Chance holes up in his jailhouse to fend off bandits trying to bust Joe Burdette out of jail before the Marshall arrives. (Carpenter even edits Assault under the pseudonym of John T. Chance in the credits.)

But while watching it for the first time just a few days ago, the biggest influence that struck me wasn't the 1959 Howard Hawks western but the zombie stylings of George A. Romero.

So to no surprise, I noticed a few writings sighting Romero's Night of the Living Dead ('68) as a definite influence and it makes perfect sense. The way that the blood-thirsty mob in Assault on Precinct 13 is depicted as seemingly regenerative, ignorantly persistent and carelessly propulsive, Carpenter is portraying them as essentially sub-human - sacrificial sheep without a regard in the world for their life.