Leading the squad is Major Kirby (John Wayne), a tough but sympathetic leader who openly opposes to the indecision and camaraderie of Captain Griffin (Robert Ryan), the emotionally compromised second-in-command. (This dichotomy is similar to the one between Wayne and John Agar in the aforementioned Sands of Iwo Jima.)

Ultimately, not unlike Henry King's Twelve O'Clock High ('49), the film is about the relationship between the two men and Captain Griffin's inevitable understanding of leadership in the name of a successful mission and nothing else.

Produced by the legendary Howard Hughes and directed by 50's auteur Nicholas Ray in one of his early works, the esteemed director was once quoted as saying that he hated war movies and his own try at it certainly reveals itself to be an apathetic and largely unimpressive effort. 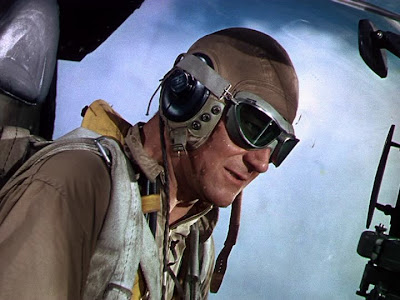 Shot in Technicolor at the behest of Mr. Hughes, Flying Leathernecks has a base visual style, a far cry from works like Johnny Guitar ('54), which displays Mr. Ray's bold use of color before he extended his work into the filed of CinemaScope - exemplifying the process in Rebel Without a Cause ('55) and Bigger Than Life ('56)

Of course, history would suggest that Nicholas Ray would be permitted to exercise full creative control until the essential cashiers du cinéma western Johnny Guitar, which would explain why Flying Leathernecks feels measly and second-hand.

The flying sequences are disastrously incomprehensible - a nebulous haze of sound-stage cockpit views and colorized stock footage. It's one of those rare war films that frankly bores when the guns start blazing. The bumping heads of Wayne and Ryan is what keeps the film afloat, but for a good air-combat film, look elsewhere. [C+]
Posted by Chase Kahn at 10:51 PM