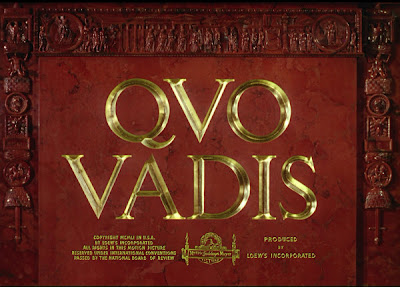 No thorough compilation of the epic is complete without Mervyn LeRoy's Quo Vadis (1951) - not because of its quality, per se, but for it sheer size and historical context. In what would be a decade defined by all things bigger and wider, Quo Vadis was the ignition.

Shot at the famed Cinecitta Studios in Rome (which would later serve as the shooting grounds for William Wyler's Ben-Hur), the film charts the turmoil brewing between the Romans and the Christians thirty years after the crucifixion of Christ, all through the eyes of a Roman commander, Marcus Vinicius (Robert Taylor) who falls in love with Lygia (Deborah Kerr), a Christian.

The unlikely romance - approached with trepidation by Vinicius who considers the followers of this new sect as rebels - takes them through the games of the Colosseum all the way to the extravagant emblazoning of Rome at the hands of the babyish, wretched Emperor Nero (Peter Ustinov).

The shoot was reportedly a bit hazardous from a technical standpoint, with the main obstacle being the Italians' unfamiliarity with the aspects of a Technicolor production. Nevertheless, the results are frequently stunning - all the way from the costumes to the thousands of Italian extras substituting for the mob of Rome. (And audiences were pleased, as well, making Quo Vadis the highest-grossing film of 1951). 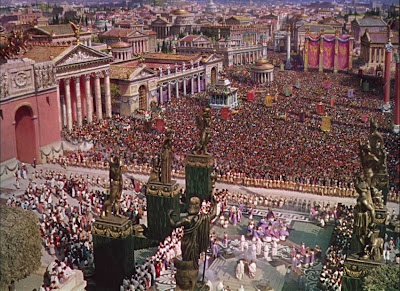 Although not quite as beatific as The Robe (1953) or as elementary as King of Kings (1961), Quo Vadis is more or less cut from the same cloth. A bloated, eye-catching extravaganza full of faith-mongering biblical imagery and anti-tyrannical defiance, this epic pretty much encapsulates both the wonder and the exhaustiveness of excess. [B-]
Posted by Chase Kahn at 4:24 PM