I had to chime in on the whole Sony/Columbia Spider-Man story that's been floating around the past couple of days, with Sam Raimi leaving the production altogether as a result of his apparent disdain towards the script, which has been through so many hands the ink's probably blurred. (James Vanderbilt started it and most recently, Gary Ross was brought in to touch it up). 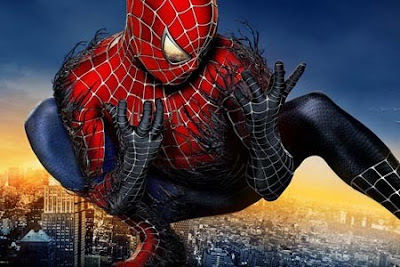 So given the facts, Sony Pictures has scrapped the project altogether and will instead go in a different direction with the franchise. They will begin production on a whole new line of Spider-Man films and that means Tobey Maguire has played Peter Parker for the last time.
This article by Brad Brevet at Rope of Silicon touches on the entire series of events if you want an in-depth look, but apparently Sony is looking to go darker with this thing (a la Batman Begins) - a trend that is being welcomed by audiences across the board, and will happen again with 20th Century Fox's upcoming reboot of The Fantastic Four.
Honestly, I thought Spider-Man 2 was brilliant and I don't think that a "grittier" or "scruffier" set of Spider-Man films would match it nor do I think that its necessary. It's not like Raimi's films were pure camp or anything. (Well, at least the first two weren't, I know that much.)
Of course this all goes back to Disney acquiring Marvel in the early fall. Now these properties that didn't go over in the deal are having to be rushed into production to avoid the pitfall where inactivity would result in said property going back over to Marvel (i.e. Disney). Although there is no evidence that Disney is even interested in releasing tent-pole superhero films - maybe they just wanted to beef up their theme parks.
Posted by Chase Kahn at 6:49 PM