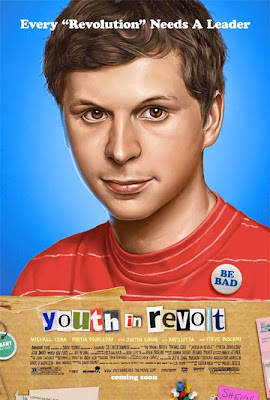 Miguel Arteta's crude and cutesy Youth in Revolt is the story of two young people destined to end up together, no matter how wacky or improbable a road it takes to get there - it's like Pickpocket or Breathless for the raunchy teen-comedy crowd.
If there is one interesting aspect to the film, er...well, make that two, its that a) it's so over-the-top and surprisingly crass that it manages to catch you off guard at times and b) Michael Cera truly is enjoyable, I mean that. As his rebellious and stone-faced alter ego Francois Dillinger, Cera is playing the kind of character (albeit in a heightened, exaggerated sense) that we typically don't associate with the dweeby, skinny poster-child for teenage geekiness. Unfortunately, the movie is about Nick Twisp.
The problem with Youth in Revolt is that, at heart, its still the same old exercise in virginal awkwardness and sexual discovery - bad drug experiences, sneaking into girls rooms, running around in your underwear, etc, etc. We even get a claymation opening credits sequence, how cute!
And the girl in question, Sheeni Saunders (played by newcomer Portia Doubleday) is certainly adorable, but why do I kind of hate her? She has Jean-Paul Belmondo plastered on her walls, she obsesses about French culture, wears cute sun dresses and knows the difference between Ozu and Mizoguchi, yet at times, I kinda wanted to strangle that bitch.
Youth in Revolt is a strange, unfunny, love-on-the-run mishmash - a comedy that mistakes vulgarity for laughs and teenage blundering for character building. It's not a good sign when the funniest moment is an unintentional homage to Charlotte Gainsbourg's slow-motion shower scene from Antichrist. Now there's a film that gets relationships right!
Posted by Chase Kahn at 10:35 AM