One of the many World War II films made by Warner Bros.' Mr. Everything, (the Hungarian-born Michael Curtiz) "Passage to Marseille" is a sturdy, sprawling wartime action-drama about a group of French convicts (including Humphrey Bogart and Peter Lorre) who are picked up mid-escape in the Atlantic by a French ship inhabited by a sympathetic Claude Rains, among others. 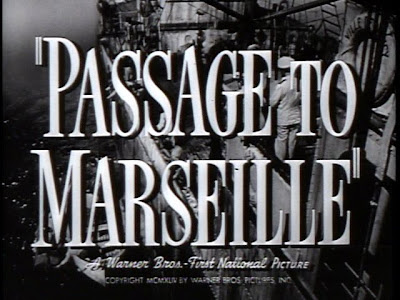 The film is a testament to the endurance of patriotism, which is a common theme that can be found in most of Curtiz's works, including "Captain Blood," "Virginia City," and "Casablanca." Especially in the case of the latter, which not only shares common elements of French resistance during wartime and most of the same key castmembers, but specifically with the arc of Humphrey Bogart's character - which in both cases he becomes, as Claude Rains would say, "a sentimentalist."
I suspect the disappointment of "Passage to Marseille," both at the time of its release and today, stems from its inevitable comparisons to "Casablanca" - which has an iconic script and an attractive Humphrey Bogart-Ingrid Bergman romance at its center to woo generations of audiences. In my opinion, I believe that "Passage to Marseille" is a film that deserves to be mentioned in the same breath.
The biggest complaint people seem to have with the film is the tireless use of flashbacks, which take up the majority of the running-time, (it's one of the few films in history to have a flashback withing a flashback within a flashback) but if petulant viewers would only stop complaining, they would realize that "Passage to Marseille" uses the technique clearly and intelligently, revealing telling character traits and origins as to enhance the story. 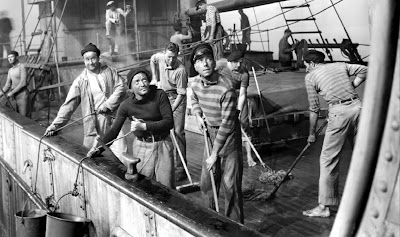 And Curtiz, the prototypical chameleon-like seal of productivity (churning out almost 50 films for Warner Bros. in the ten-year span from 1935 to 1945), is a master technician of action set pieces, which he displayed back in 1935 with the seaport finale in "Captain Blood." Here, he stages visceral amounts of destruction with exemplary craft, including a climactic bombing run by a Vichy-French aircraft on the Allied ship holding our escaped convicts. The film also has some of the best use of explosions by a studio-age action film.
It may not be "Casablanca," but "Passage to Marseille" is a potent, patriotic wartime story. In the end, when Claude Rains reads a posthumous letter describing the kind of life that these resistance fighters are paving for their children and for future generations, the film feels as resonant and human as any World War II film made during the era.