After the merger of Fox Film Corporation and 20th Century Studios in 1935, which placed Darryl F. Zanuck as President of the new 20th Century Fox, the biggest film of the studio's brief existence (and the most expensive film at the time) was Henry King's In Old Chicago ('37). 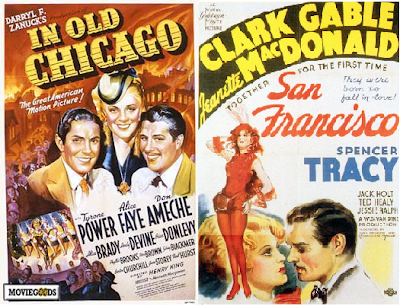 Starring up-and-coming studio mainstays Tyrone Power and Don Ameche, the film chronicles the O'Leary family's parallel rise in 19th century Chicago, climaxing with the Great Chicago Fire of 1871. Written by Sonya Levien and Lamar Trotti, the film takes great liberties in its highly fictionalized and mawkishly convenient plotting, which is somehow crammed into just 96 minutes.
Tyrone Power plays a manipulative, cowardly and black-hearted saloon owner and brother to the mayor, played by Don Ameche. Preventing his sibling from carrying out his proposed plan of rebuilding "the patch," a section of the city which looks to be a great fire hazard, the great disaster - shown in extravagant detail during the final act - proves to be symbolic of the O'Leary's internal struggles and selfishness, and presumably and inevitably, an act of healing.
In Old Chicago is a perfect companion film to W.S. Van Dyke's San Francisco ('36) if you're looking for a highly fictionalized disaster-film double header. In that film, Clark Gable plays a rough saloon owner who jeopardizes his friendship with a lifelong pal and priest (Spencer Tracy) with his cruel, self-serving ways. The 1906 San Francisco Earthquake, depicted in similar fashion, also serves as a kick-starter on the road of redemption for its protaganist.
Even with its severely rushed narrative and ham-fisted plotting, In Old Chicago is the better film. When, at the end of San Francisco, we have Clark Gable and a rag-tag group of survivors hand-in-hand singing "Hallelujah" past the rubble and wreckage, not even Zanuck's film is that mawkish and on-the-nose. 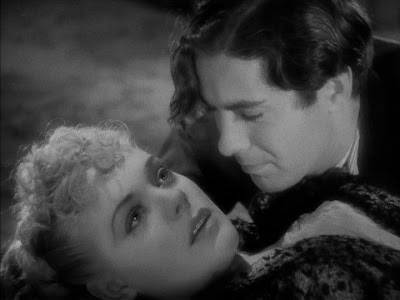