Harry Knowles of Aint it Cool News posted a quick review of Chris Sanders' How to Train Your Dragon (Paramount/Dreamworks, 03.26.10) yesterday after being treated to a screening in the morning and it's a full-on rave. 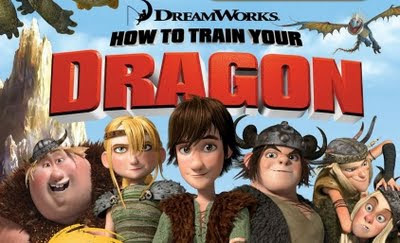 I don't particularly like the output that DreamWorks Animation puts out, but I will concede with a point that Harry makes about comparing this film to Kung Fu Panda, one of the few films of theirs that actually works for me.

That film was kid-friendly funny, beautiful to look at and refreshingly devoid of cheap, low-ball humor and pop-culture references. (I'm look at you, Monsters vs. Aliens). And I think that has to do with its period setting, which is the case here with How to Train Your Dragon, a story about a worthless, wanna-be Viking named Hiccup who captures and then befriends a dragon named Toothless. I love the foggy, misty Scottish-countryside look it, which apparently has influenced and consulted by Roger Deakins.

The trailer isn't anything impressive, and I'm not looking forward to the "dragons are misunderstood/anti-captivity angle," but Harry concedes as much in his review. Hey, it has to be better than Shrek Forever After, no?