The African Queen Blu-ray which comes out on 03.23.10 should be another gorgeous transfer of a classic from Warner Home Video (whose North by Northwest, Gone With the Wind and Wizard of Oz high-def treatments are stunning restorations), but am I the only person in the world who simply doesn't care for this John Huston float-along World War II log ride? 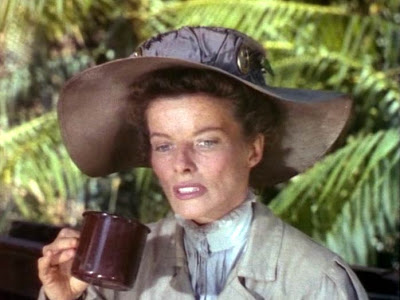 I absolutely love the opening credits set to just the sounds of the African jungle, the plain white letters welcome in their simplicity, yet once the the film starts, I just don't care two licks about Katharine Hepburn and Humphrey Bogart's better-late-than-never romance or their hair-brain scheme to sink a German vessel.

I like my Bogart stone-faced and ashamedly heroic, not goofily drunk with his Babe Ruth hat. Plus, every time Hepburn says, "Hip, hip hooray!" I lose a part of my soul.

Of course I'm going to give it another chance with this new high-def transfer, (I've only seen the film twice on TCM) but I can't imagine myself ever loving it. I haven't liked one of the "Hollywood Goes to Africa" travelogues released in the 50's - King Solomon's Mines, Mogambo, The African Queen. I don't know why, but I just resist their charms.