A silent film long-thought to be lost, a print of King Vidor's Bardelys the Magnificent ('26) was recently found in an archive in France in 2006, restored and now available for all to see in a tremendous transfer from Flicker Alley. 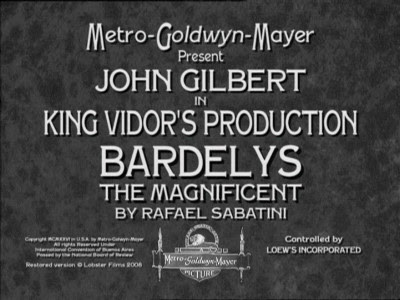 Bardelys the Magnificent stars John Gilbert, who after teaming with King Vidor on the World War I epic The Big Parade ('25), was a massive star. Bardelys never lived up to the enormous expectations following their previous collaboration, but it was a success nonetheless, and can now be enjoyed by generations to come.

Once you get past the fact that everyone in this adaptation of Rafael Sabatini's novel of French royalty under the reign of King Louis XIII looks like the Burger King mascot, it's a very enjoyable film, featuring a rousing escape sequence from the gallows near the end and a beautiful Mont Alto Orchestra score based on period photoplay music.

Included below is a lovely second-half boat ride making great use of an over-hanging tree, Eleanor Boardman as Roxalanne de Lavedan and John Gilbert as the titular Bardelys. (Note: this is not the Mont Alto score that accompanied the print I saw on TCM, but rather an alternate piano score included with the Flicker Alley DVD).