Brian De Palma's The Untouchables ('87), which I watched today for the first time in a while, is a very odd film, but a decidedly insufficient one if you ask me. It has a really intriguing and half-brilliant Ennio Morricone score, plus one great set-piece on the steps of Chicago's Union Station, but other than that it's a doughy, feather-thin and tonally disorganized mess. 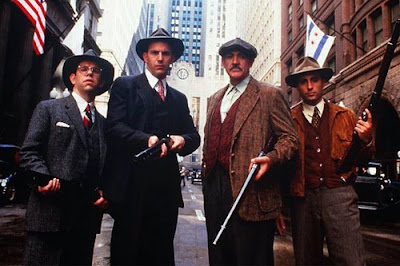 The film's frolicsome, jesting mood doesn't fit with the Peckinpah eruptions of violence and there's never any sense of scale or danger in the entire running-time even though a good majority of characters on screen are offed in gruesome, gleeful ways. Most of the time it seems as if Eliot Ness (Kevin Costner) and Jim Malone (Sean Connery) are the only cops in the city and they practically live next door from kingpin Al Capone (Robert De Niro).

I also have a big problem with almost every performance in the film. De Niro seems to be in self-parody mode, encapsulating every performance he's ever given, while Andy Garcia just sort of looks around at everybody with his slicked-back hair and fake-Italian bravado. Meanwhile, Sean Connery, who somehow won an Oscar for this, plays the aging, rough-and-tumble Irish cop Jim Malone with an unrelenting jocular-Grandpa sidekick vibe that echoes what he would later turn in as the father of Indiana Jones in The Last Crusdae ('89). (Harrison Ford was offered the role of Eliot Ness in The Untouchables but declined.)

And that brings us to Kevin Costner as the aforementioned Eliot Ness, who turns in one of the most boring, inadequate performances of his career, and in a movie stocked full of actors off their game, he makes his presence felt in the worst way. How this guy even got dressed in the morning, much less tracked down the most notorious gangster in our nation's history, is beyond me. His scenes with his wife (Patricia Clarkson in her screen debut) didn't work for me at all, either. This is a sometimes stylish and well-produced film, I'll give it that, but it's too jaunty, disproportionate and chimerical by a half.
Posted by Chase Kahn at 10:01 PM