Criterion announced their April titles this morning with Blu-ray releases of: 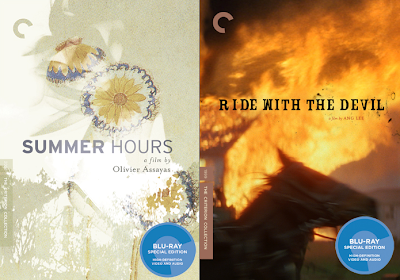 Plus, a DVD release of Sidney Lumet's The Fugitive Kind (1959), starring Marlon Brando in a Tennesse Williams play/screenplay.
Ang Lee's civil war epic Ride With the Devil is a restored director's cut, adding over 20 minutes of footage in an attempt to restore the film to Lee's original vision. Otherwise, I'm a little let down - most of these with the exception of Vivre Sa Vie are readily available on DVD. Although in terms of artwork, Summer Hours and Ride With the Devil are stunning.
Posted by Chase Kahn at 11:47 AM