Robert Redford's Quiz Show is a very good period-detailed look into corporate and political corruption during the heyday of 1950's television, specifically the true-life story of the federal jury investigations into the alleged 1956 rigging of the hit quiz show Twenty-One, in which a former contestant, Toby Stempel (John Torturro) accused NBC and producer Dan Enright of bribing him into taking a dive so as to "lose" to the more popular Charles Van Doren (Ralph Fiennes) and thus, boost "plateaued" ratings. 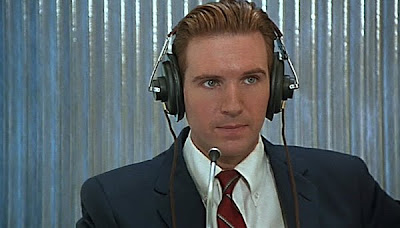 It's essentially a tragedy in a maze of guilt, greed and corruption in which nobody ends up sitting pretty by the time it's over. The most interesting aspect, which was admittedly dramatized by Redford among other things, was the investigation spearheaded by congressman Dick Goodman (Rob Morrow) who spends the majority of the film sniffing around desperately for clues until he loses himself and his direction in the end. ("I thought we were going to get television. The truth is, television's gonna get us.")

Sure, Quiz Show is a little on-the-nose at times (a game of poker as a metaphor for lying, brilliant! Chess, anyone?) and even if you have no historical context or background about the quiz show scandals of the late 50's (like me), you know where the thing is going after fifteen minutes and there very few surprises along the way.

Perhaps the biggest surprise was how little screen-time is actually spent watching the quiz show, Twenty-One. I would have liked to have seen more of that, which would have plugged in some drama and tension in places where it would prove beneficial. Hell, Paul Thomas Anderson's Magnolia ('99) had more game-show drama.

Still, the performances are top-notch, the period dressings and production design are good and predictably sepia-toned with poodle-skirt music and Rhinestone glasses. And while it sometimes drags along with its corporate greed tangents and truth-seeking riffs, the heart of the movie is Rob Morrow's Dick Goodman, who seems to resemble Zodiac's Robert Graysmith (Jake Gyllenhaal) with his doggedness, perserverance and his arc - coming from a supporting character to a lead.

He gets so far buried underneath his own digging that he can't see which way's out. The blow-back that his character endures over the last thirty or so minutes of the film is touched upon, but not in any resolute way. Quiz Show is a film that goes here and there and compels throughout without hitting anything out of the park - an investigation that's more interesting than riveting.