Originally titled Gallagher and a vehicle solely for Loretta Young, the overwhelming popularity of co-star Jean Harlow forced Columbia and Harry Cohn to change the title and the marketing focus for this ultimately succesful Frank Capra film.

In the spirit of The Front Page (1931) or its subsequent offspring, His Girl Friday (1940), Platinum Blonde (1931) is a newsroom screwball comedy - furiously paced and expertly performed - though not quite as joyfully anarchic as the greats of the genre. 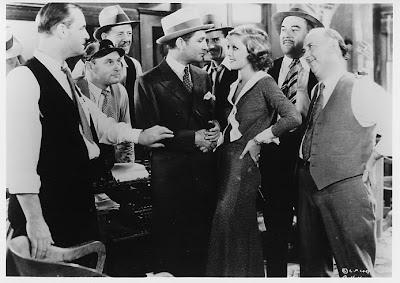 Nevertheless, it's easily one of Frank Capra's most purely enjoyable early sound films, centering around a reporter (Robert Williams) who falls for a glamorous, wealthy and radiantly blond heiress (Jean Harlow). This is bad news to the slinky, puppy-eyed Gallagher (Loretta Young), who secretly lusts for her adventurous journalist colleague.

Williams, who oddly resembles Jeremy Renner, shows a surprising range of bravado and comedic timing usually reserved for Cary Grant. In a film loaded with two of the finest actresses of the age, Williams provides a much-needed male presence and a desirable object perfectly capable of being fought over by two beautiful starlets. Tragically, the 34 year-old actor died of a ruptured appendix just four days after the film's premire, ending a career surely on the rise.
Posted by Chase Kahn at 9:45 PM