Orson Welles' The Stranger (1946) is perhaps the auteur's most unglamorous and unproblematic film. No stories of studio tampering, production troubles or financial losses - it was surprisingly and dissimilarly a success. 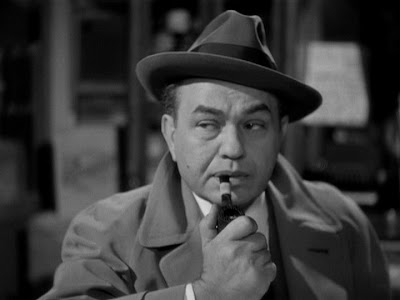 It's a taut, exceedingly and expectedly well-shot film noir about a pertinacious and rotund detective (Edward G. Robinson) who's hot on the trail of a suspected Nazi war criminal (Orson Welles) now under the guise of a university professor named Charles Rankin.

As his wife (Loretta Young) becomes more and more exposed to the idea of her husband as somebody potentially in hiding from authorities, it plays out like a killer-in-the-midst drama reminiscent of Alfred Hitchcock's Shadow of a Doubt (1944).

I love the autumnal small-town Northeastern setting (the tall, white clock tower always looming in the background ) proving once again that Orson's mis en scene and location shooting were unparalleled in the days of Hollywood's studio age.
As is the case with almost all of Welles' films after Citizen Kane (1941) and The Magnificent Ambersons (1942), The Stranger has a distinctive, identifiable quality - kooky, quirky and yet unmistakably effective. None of his films exhibited this quality of being simultaneously ludicrous and yet masterful more so than The Lady From Shanghai (1948) and Touch of Evil (1958). 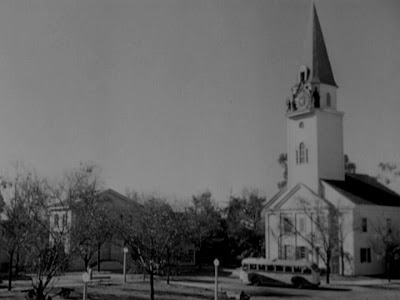 The Stranger doesn't reach this level of greatness and it isn't one of the director's very best films, but I think it manages to be underrated - its lack of ebullience and zaniness mistaken for flaws. True, this is a different kind of Orson Welles film, but no less engaging or proficient.
Posted by Chase Kahn at 8:32 PM