Attempting to bust out of studio complacency, producer Harry Cohn and director Frank Capra went back into their aviation-love triangle well with Dirigible ('31), the most expensive movie Columbia Pictures had ever produced.

Capra made no mistake about attempting to match the success of his first talking action-picture Flight ('29), casting the same two leads Ralph Graves and Jack Holt to play pilots competing for the affections of a beautiful lady, this time played by Fay Wray just two years before her legendary turn in King Kong ('33). 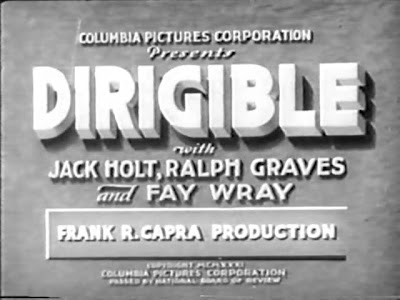 Dirgible makes no bones about what it is - it's high-flying romantic escapism made to exploit the public's insatiable appetite for aviation films, as evidenced in William A. Wellman's Wings ('27) and Howard Hughes' Hell's Angels ('30) to name a few. Capra's second exploit in this crowded field of topical adventures traces two rival pilots - one a wild grand-stander (Graves) and the other a distinguished and honorable dirigible operator (Holt) - as they attempt to reach the South Pole.

Complicating matters is the wife of Ralph Graves' Friskie Pierce, Helen (Wray), who refuses so sit idle while her husband flies half-way around the world and then naively attempts to rebound with his best friend, Jack Bradon (Holt), when he's away. Instead of dumping one pilot for another (isn't this a lateral move?) she should be seeking a man with more inactive career choice more befitting for her cloying personality - perhaps a painter or a writer.

Although it shamelessly capitalizes on film's of its kind that came before it, Capra proves once again that he's a great entertainer and magician of aerial photography. Avoiding the technical pitfalls of Flight (a dirigible crash over the Atlantic and a rough Antarctic landing show leaps in technological progress) and taking advantage of a supportive and accommodating U.S. Navy who allowed Columbia Pictures to shoot famous air-suspended dirigibles like the USS Los Angeles, the film feels polished, if nothing else. 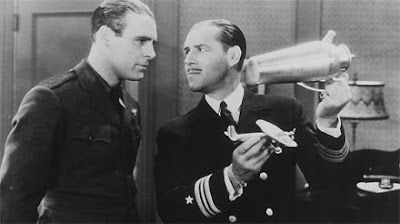 The problem lies in the film's rote and reductive screenplay (co-written by Capra regular Jo Swerling), which stresses predictable plot points and exploits the type-casted personas of its actors. Nevertheless, the film was a huge success for Columbia and was the first film from the studio to premiere at Grauman's Chinese Theater, a fateful night on April 3rd, 1931.

It's too flimsy and familiar, and although technically evolved from Frank Capra's previous aviation epic Flight, Dirigible seems auspiciously grand, yet dramtically stale. It's a big, giant zeppelin of a film - a wonder of the skies, yet hollow, empty and inevitably, obsolete.