Okay, so it was announced sometime yesterday that "Zombieland" writers Rhett Reese and Paul Wernick will write the script to the "Deadpool" spinoff, with Ryan Reynolds reprising the role he played in Gavin Hood's mostly detestable "X-Men Origins: Wolverine." 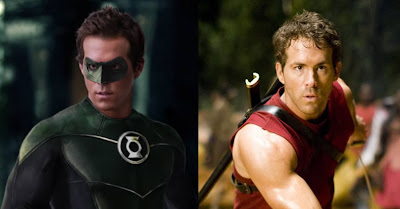 Obviously, it's no surprise that a relatively well-known character in the Marvel canon should star in his own vehicle, I'm not arguing that, but why Ryan Reynolds? I don't think I'm exaggerating when I say that his portrayal as the dual-bladed mercenary was highly irritable to say the least, and I'm certainly not the only one who thinks so.
Part of the equation likely stems from the fact that Reynolds is apparently an avid "Deadpool" protector (i.e. committed to doing it himself and doing it the right way), and the other part of it is Reynolds' involvement in Martin Campbell's "The Green Lantern," which will hit theaters on June 17, 2011, ahead of "Deadpool."
Posted by Chase Kahn at 3:04 PM