Criterion hasn't announced their April releases yet, but I received their January 2010 newsletter in my inbox today with the following trivia question:

"Do you know which upcoming Criterion release was just named the best foreign-language film of 2009 by the National Society of Film Critics, the Los Angeles Film Critics Association, and the New York Film Critics Circle, as well as the number-one movie of the year in an indieWIRE poll of more than one hundred critics?" 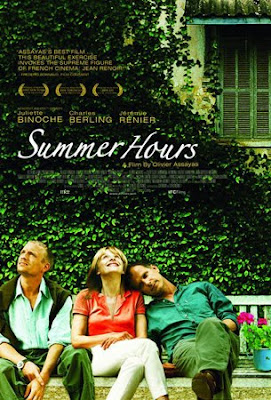 Well, the answer is Olivier Assayas' Summer Hours, a very good French-language film about loss, family and generational divide. I had a hunch since IFC announced their deal with Criterion in the fall to release their films of DVD & Blu-ray. I'm personally hoping for an Everlasting Moments or an Antichrist Blu-ray.
Posted by Chase Kahn at 3:10 PM