Frank Capra and Barbara Stanwyck teamed up for a second time in this murky and frothy religious sermon, The Miracle Woman (1931), about a false prophet named Helen (Stanwyck) who questions her motives when she falls in love with a blind ventriloquist (David Maners) whom she meets at one of her staged demonstrations. 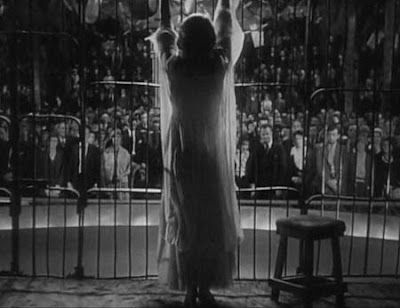 The blind man, glum and suicidal, hears the voice of Stanwyck's phony religious awakener and rejuvenated and enlightened, seeks her out. But naturally, the one in need of a miracle is the one who least expects it.

In short, the film is a good old faith quandary with extra cheese. Stanwyck, as she so often does, makes the most out of it and proves to be a commanding presence and a believable actress even in the most unmistakably rote and force-fed of films. As with almost all of her screen roles, the actress plays a woman who is charming yet combative, strong yet loose, as she heads down a path of self-deceit and moral compromise until she finds a man who either knowingly or unknowingly set her on the straight and narrow path to redemption.
Based on a stage play titled "Bless You, Sister," and produced by Columbia honcho Harry Cohn, The Miracle Woman is mercifully short, given the fact that the film's opening titles pretty much sum up the proceeding events. Luckily Stanwyck, with her usual charm and sympathy, almost makes the journey a trip worth taking. But, as she sings, "Glory, Glory, Hallelujah" down the streets of an unnamed Southern rural town, the screen fading to black, this journey becomes hopelessly italicized.
Posted by Chase Kahn at 3:36 PM