Nobody was ever a greater victim of studio tampering than Orson Welles during his brief time and limited productivity as a filmmaker under the umbrella of the Hollywood system. Additionally, no film is more reflective of this notion - with the exception of RKO's butchering of The Magnificent Ambersons (1942) - than The Lady From Shanghai (1948), distributed by Harry Cohn at Columbia under unusual circumstances.

In 1946, while directing a stage production (a musical) of Jules Verne's "Around the World in Eighty Days," Welles ran out of funding and desperately convinced Cohn to send him the extra dough to keep the show running. In exchange, Welles promised to star, write and direct a feature film for Columbia at no further cost - needless to say, Cohn accepted.

The Lady From Shanghai, in its mutilated 87-minute cut, is a blistering and convoluted film noir about an Irish sailor (Orson Welles) who meets the stunning wife (Rita Hayworth) of a rich, infamous lawyer (Everett Sloane) as they embark on a journey down the Atlantic coast. When a friend and minion of the powerful and mysterious Mr. Bannister brings a proposition to Mr. O'Hara (Welles), he becomes involved in an increasingly volatile murder plot, fighting to get to the truth.
The elaborate smoke-and-mirrors narrative is muddied even more by the fact that Harry Cohn and his editors at Columbia trimmed nearly an hour off of Orson's original cut, resulting in a film that is admittedly incomprehensible at times, yet the production, in its own strange way, seems to thrive off of it - as if convolution were one of its most endearing traits.
As he exhibited (and would exhibit) in all of his films, Welles proves to be a filmmaker of extreme technical mastery, creating indelible set-pieces and masterful camera movements that become as much a part of the story as the actors or the script. When two key characters arrange a secret meeting, it's at the Steinhart Aquarium in Golden Gate Park. For a shootout in the film's climax, a literal hall of mirrors becomes the battleground (easily the film's highlight). 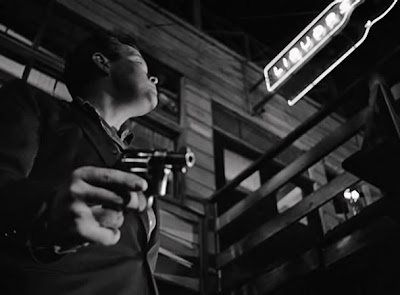 At this time, Orson was married to co-star Rita Hayworth, but the two were estranged throughout the filming of The Lady of Shanghai, which began in 1946 before being released in June of 1948, an unusually lenghty period of post-production.

Even in a corrupted form, The Lady of Shanghai has more personality and more innovation than the majority of film noirs released by Hollywood throughout the 40's and 50's. It may not make a lick of sense, but just like Orson's ill-fitting Irish accent, it's just crazy enough to be some kind of masterpiece - messy and marvelous. I love the final lines:
"The only way to stay out of trouble is to grow old, so I guess I'll concentrate on that. Maybe I'll live so long that I'll forget her...maybe I'll die trying."
-A good portion of the film takes place on a luxurious yacht called the "Zaca." This was the personal yacht of actor Errol Flynn, who took the wheel in-between takes and has a brief appearance in the background of a shot.
Posted by Chase Kahn at 5:17 PM