In 1929, the U.S. Marines were involved in an intervention in Nicaragua, fighting rebel forces under the leadership of revolutionary figure Augusto Sandino. Capra's whole-hearted political support of U.S. involvement led to significant cooperation between Columbia Pictures and the U.S. Marines for this aviation epic billed as the first "100% all talkie of the air."

And it was certainly one of Capra's first talkies, regarded at the very least as his most successful and fluid of the early sound era. The story for Flight ('29) was ripped right from one of Capra's more successful silent films under Harry Cohn at Columbia, the underwater actioner, Submarine ('28). 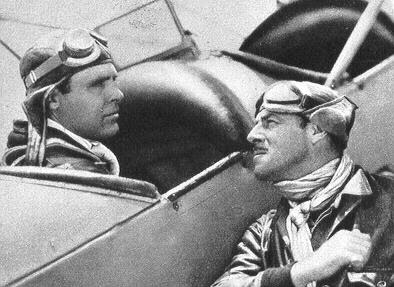 It returned stars Jack Holt and Ralph Graves as Marines combating both rebels in Nicaragua and themselves, for the affections of the on-station nurse played by Lila Lee. It's a classic love-triangle that Capra had used before and would use again. (We'll get to that later in the marathon.)

This is a straight-forward, easygoing bit of crowd-pleasing formula, drawing on the current fad of the day (aviation films) and putting it into a funny, dangerous, and technologically-driven production that can still hold an audiences interest today.

Flight is a film that certainly shows its age - spotty, inaudible dialogue, poor sound mixing - while still hinting at what was to come with the advent of sound. (At the time, it was considered a monumental achievement for its exploration in that area.) Some of the aerial maneuvers can take your breath away with their realism, while crashes and landings and take-offs are done with cheap models, taking you out of it completely.

Nevertheless, it's a grand production (Capra shot over 100,000 feet of film compared to the final cut of just 10,000) and it deserves to be considered an historical film on account of its exploration and implementation of what can be accomplished in the field of sound.

This is a perfect starting point for the films of Frank Capra, bearing most (if not all) of his future trademarks - the comedy and the romance, the blending of current events and U.S. politics into the story, and the director's unabashed reputation for escapism and "fantasies of goodwill." Flight is a film that's as candid as its title - proving that formula (even Depression-era formula) can still entertain.