I have a feeling that Olivia de Havilland's performance as a patient in an insane asylum in Anatole Litvak's The Snake Pit ('48) was the role that she had been working and fighting towards her entire career. No longer Errol Flynn's damsel-in-distress or Bette Davis' better half, the trailblazing brown-eyed actress went cuckoo for this Oscar-nominated performance. 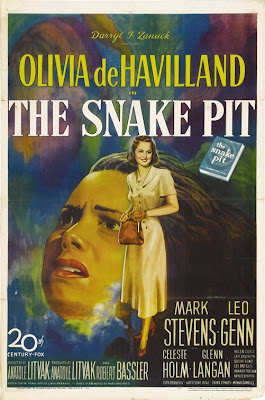 Based on Mary Jane Ward's novel, The Snake Pit begins with Virginia Cunningham (de Havilland) perched on a bench. We hear her thoughts (as we do throughout) as she appears to be having a conversation with a man who is currently out of frame - the camera then pulls out to reveal the setting to be the side-yard of a mental institution, with Virginia not remembering how she got there.
And thus begins a psychological mystery through the mind of a woman who is mentally broken-down to the point where she's nearly non-existent. Olivia de Havilland's performance is ripe with authenticity even when the film isn't. As Virginia's diagnosis comes to the surface, through a deluge of flashbacks and off-screen narrations, although the content is accurate, it feels like a convoluted B-movie mystery at times with weak supporting performances and quick and condensed montages.
The scenes that really work are the ones present inside the institution (interactions amongst patients, dances, social events, etc.) which serve as much to drive the story as they do to expose the current conditions of the mental-care facilities during the mid-20th century. And it's not in an obvious, condemning way, like portraying the guards and doctors as manipulative, exploitative villains. It's more interested in depicting the inadequacies of the facility through overpopulation, staff relationships and ignorance within the higher-uppers, who make decisions frequently without consent. 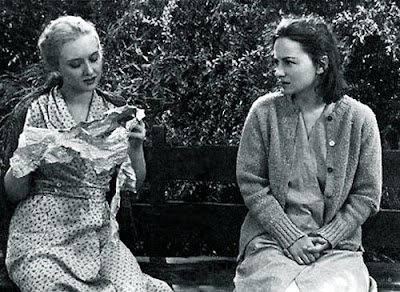 According to 20th Century Fox, twenty-six out of forty-eight states had enacted reform legislation in regards to their mental institutions as a result of The Snake Pit, a film carried dramatically by Ms. de Havilland's performance and validated by its cultural significance.
Posted by Chase Kahn at 4:08 PM