Michael Curtiz's "The Sea Hawk," adapted from but not resembling an earlier 1924 silent version, was the first swashbuckling film starring Errol Flynn that did not include Olivia de Havilland as the romantic female lead. 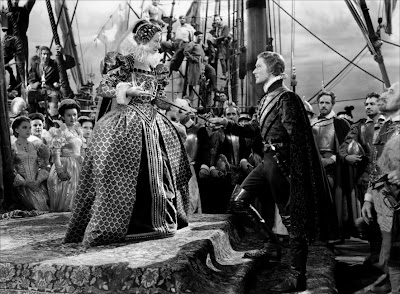 It's also a very odd film - stuffy, classical, a bit drab - yet it mostly works and remains a well-produced, thematically consistent work in the canon of Michael Curtiz's studio age action films at Warner Bros, complete with a solid Erich Wolfgang Korngold score.

It's a 16th century Queen Elizabeth-era story of defiance and patriotism (timely for 1940 as a depiction of England facing a dominant, brutish and militaristic nation) during the uptick of friction with Spain while the Spanish Armada threatened to flood the English Channel. It's a film devoid of Errol Flynn's dashing charm and smirky confidence, as the usually dashing Flynn is reduced to playing a tormented, imprisoned and abused English sea captain.

It works for the most part, and is probably the most realistically-produced and historically-detailed of the Errol Flynn period-swashbucklers until that point. It also symbols - at least for me - the start of the Jack Warner clash that eventually rode Errol Flynn out of town, and at the time, had already upset Olivia de Havilland to the point where she would not accept playing the damsel-in-distress to Flynn's heroic lead anymore. (She would eventually take Warner Bros. to court and win in 1944, a landmark case for actors vs. studios.) 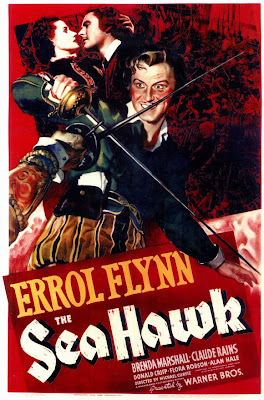 I also didn't care for a sepia-toned segment taking place on a cross-Atlantic secret mission to Panama halfway through. Nevertheless, "The Sea Hawk" does work on the strength and scale of its production and as a pro-English World War II allegory. It's one of the most indirect propaganda/wartime films made during the Hollywood studio age.
Posted by Chase Kahn at 3:18 PM