I'm legitimately looking forward to Martin Campbell's Edge of Darkness, which of course, opens this Friday (Warner Bros., 1.29.10). Not because I'm on pins-and-needles awaiting Mel Gibson's return to the screen (I could care less), but because one, I'm hearing some good things about it and two, because it looks to be an adult-stream vigilante film in the vein of classic 70's paranoia and governmental conspiracy thrillers. 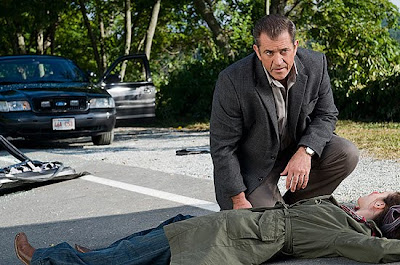 It's also refreshingly set in Bwah-ston and not in some Euro port with tiny cars and mysterious French guys with beards. I'm not expecting The Parallax View or Three Days of the Condor, but I am expecting something better than Taken.
Posted by Chase Kahn at 11:46 AM