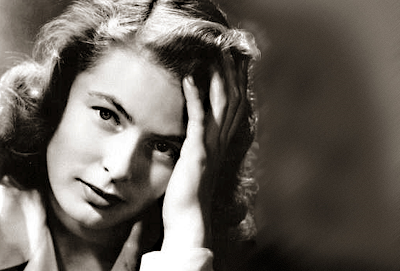 Hard to Find
Saratoga Trunk (1945) - This Sam Wood drama about a woman who returns to her native Louisiana in the 19th century isn't a great film, but the performance of Ingrid Bergman as a Creole woman obsessed with reclaiming her mother's pride by upper-class snobbery is one of her best. Gary Cooper co-stars, the costume design is irresistible and you can only see the film here or by purchase from Warner Archive. Warner Bros, 135 mins, 6:00am ET

Stromboli (1949) - This Roberto Rossellini work was the result of a letter sent by Ingrid Bergman to the famed Italian director and the root of their eventual affair and marriage. I believe you can import the film for $15-$20 or watch the VHS, but this is rare chance to see it for free. Connoisseur Video, 107 mins; 8:15am ET

The Essentials
Casablanca (1942) - A little too essential, right? Everyone has seen this, but by the off-chance that someone hasn't, correct it immediately. What we have here is probably the quintessential American movie and the ultimate story of selflessness, love and heroism. The dialogue is tremendous and quotable and its legacy is carried by the performances of its cast. Warner Bros, 102 mins; 9:30pm ET

Notorious (1946) - One of my favorite Hitchcock films, this WWII spy drama contains another one of the best - if not the best - Bergman performances. Claude Rains as a villain, Cary Grant as a suave romantic government agent, numerous key suspense sequences and a terrific closing shot. RKO Radio Pictures, 101 mins; 11:30pm ET
Posted by Chase Kahn at 5:03 PM