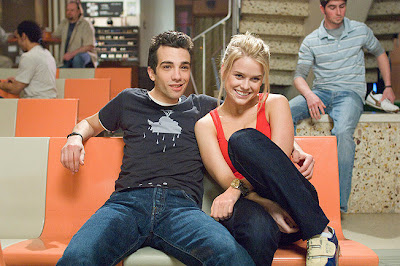 A lively supporting cast and two likeable leads ultimately can't save this blabbering and preachy romantic comedy that's equal parts endearing and offensively bland. It covers all of its bases as a part of the aftershocks still rippling through megaplexes courtesy of Judd Apataw - a gaggle of curly-haired dim-witted friends, post-adolescent aloofness, manscaping jokes, etc.

It would all be fine if it wasn't so effortlessly clichéd and insufferably obvious in its message of self-confidence above insecurity, an attempt to outwork the audience's suspicion that this girl would seek-out and attach herself to this guy.

It's a bit of shame if only because relative newcomer Alice Eve is so appreciatively refined and grounded, even going so far as to acknowledge the desperate awkwardness of her rail-thin boyfriend (an endearing Jay Baruchel) on their first few dates. Inevitably, the material sinks below her and the film concludes in a shower of underlined poignancy and mawkish formula. [C]
Posted by Chase Kahn at 9:05 PM