I wrote a pilot review of FX's new series "Justified" a while back, yet the following few episodes just didn't do much for me as it unfortunately seemed to be setting itself up as a dressed-up, highly fashionable and well-acted mystery-of-the-week, and I was getting a little more deflated after each episode.

Well, I went on vacation after only seeing the first four episodes, came back with all twelve sitting there on the good 'ole DVR and I'll be damned if I didn't pick it back up again and end up falling in love. 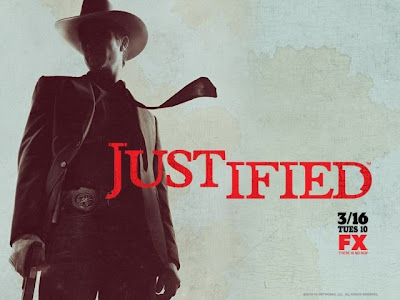 "Justified", for its first 5-6 episodes is a mostly compelling procedural with wonderful production values, a wonderful cast and a terrific central performance each week from Timothy Olyphant, but it doesn't grab a hold of you and suck you in until 9-10 shows in. (For me, it was the excellent "Hatless" (ep. 9) that struck me as the awakening of the sleeping giant.)

The way that the writers/producers engineered the plot arcs of the last 4-5 episodes - including the transformation of a key character from deranged convinct to sympathetic born-again Christian - was flat-out brilliant.

At its heart, just like the Tombstone poster that hangs in his boss' office, "Justified" is a Kentucky-fried modern western. Olyphant's Raylan Givens is the overwhelmed lawman in a hostile terrain, a man with a quick trigger finger and a smart-ass smile that straddles the line between just and unjust. The Season Finale episode, titled "Bulletville", is the show's own O.K. Corral, a stirring gunfight that would make any genre fan giddy. Can't wait for Season 2.
Posted by Chase Kahn at 8:10 AM