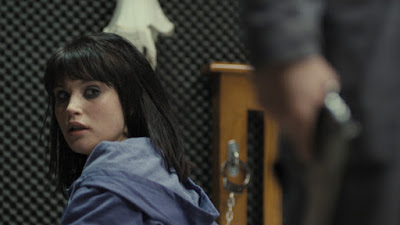 I'll just stick with a rather informal review of J Blakeson's The Disappearance of Alice Creed, an effectively gripping and grisly British kidnapper that's exquisitely photographed and composed with flair that ultimately holds together rather well for this sort of thing.

It's very committed and down-with-the-details scummy - bathroom breaks, dehydration, changes of clothes, etc. - and ever-changing in the motives and morals of its characters, including the victim herself, played by Gemma Arterton (Clash of the Titans, Prince of Persia). It's all very worthy of respect and admiration, like a sensible and level-headed reply to the twisted mass-market thrillers produced by James Wan and Eli Roth.

Yet for all of its readily apparent feats and twisty-but-not-too-twisty revelations, I didn't really enjoy it all that much, or at all frankly. It's too cramped and grimy and high-pitched - a lot of screaming and yelling and sobbing and "give me the fuck-ang keys!!" or "what the fuck'a you doin'!?"

I liked the ending, which duly alters the film's title, but I couldn't really stand to watch Eddie Marsan after about twenty minutes or so - that vice-grip gaze and ferocious spittle and razor-teeth, yikes! I respect the film to a point and what it's doing and going for meets my modest approval, I just don't really want to sit through it again. [C+]
Posted by Chase Kahn at 9:51 AM