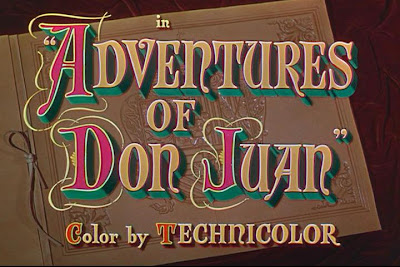 Yet for all of the negativity regarding the turbulent, endless production and inevitable career-killing outcome, fans of the golden era swashbuckler will find this one to be a drastically underrated adventure - witty, acrobatic and romantically inert, but containing some of the best sword fights ever put on screen.

Harry Kurnitz and George Oppenheimer's script is surprisingly satirical as the filmmakers have fun with the title character's sexual appeal and the usually testy relationship between Spain and England. (At one point, a certain British heiress shouts, "Stop being so...so...Spanish!") 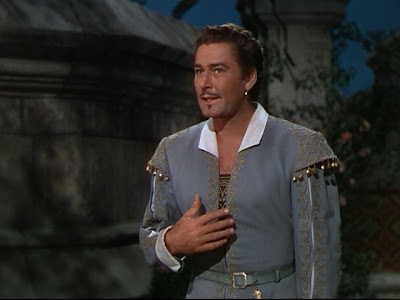 And Flynn, as the notorious womanizer, is surprisingly in-form, showing no signs of his reportedly outrageous on-set drinking habits and chronic illnesses. He's still as dashing as ever here despite the red tan, the soul patch and the earring.

And what the film lacks in a compelling female lead (Swedish-born actress Vivica Lindfors is no Olivia de Havilland), it makes up for in good old sword-clashes between tyranny and oppression.

The action culminates into a grand staircase showdown which features a gravity-defying leap from ten steps high performed by one-and-done stunt maestro Jock Mahoney - it would have been all too fitting had Flynn performed the leap to the bottom himself. [B]
Posted by Chase Kahn at 8:06 PM