Sidney Lanfield's The Hound of the Baskervilles ('39), the first of fourteen films starring Basil Rathbone in his seminal role as Sherlock Holmes, concludes with the following line: "Oh Watson - the needle!"

Sir Arthur Conan Doyle's writings on Holmes dallied with drug use, and the last line is a sly, stealthy nod to when Holmes would inject himself with morphine. How on earth they slipped it past the censors is unknown. 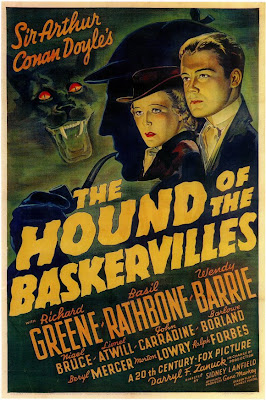 The film, which I saw for the first time, isn't quite as good as The Adventures of Sherlock Holmes ('39) in my mind (which has co-stars Ida Lupino as the pleading client), but these foggy top-hat mysteries have their place. They aren't as fun or playful as William Powell and Myrna Loy in The Thin Man, but they're good; solid.
Posted by Chase Kahn at 4:03 PM