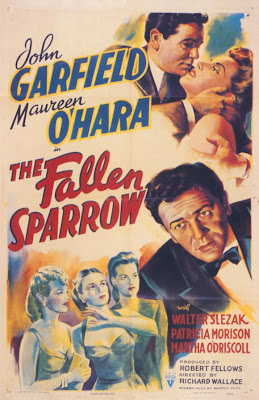 Richard Wallace's The Fallen Sparrow ('43), a hot-button wartime spy thriller about a Spanish Civil War survivor who comes back to New York to investigate the death of his friend, is elevated by its post-war anxiety and Nazi paranoia.

John Garfield, in a standout central performance, plays Kit McKitrick, a soldier who manages to escape a Nazi prison camp with his life and a desirable artifact intact. Upon hearing of his best friends "accidental" death, he goes back home and finds himself either in the middle of a wartime espionage ring or a downward spiral into mental instability.

Written by Warren Duff, a part-time collaborator with Jacques Tourner (Out of the Past, Experiment Perilous), The Fallen Sparrow is, either by design or happy coincidence a convoluted maze of Nazi suspicion, secret guilds and beautiful dames.

You're constantly working through the facts in your head ("Who was that who got killed? Now how does she know him?"), but by the last shot, a wonderful scene involving a switch on a plane headed for Lisbon, the big-picture settles in and the fog lifts on this undervalued gem. [B+]
Posted by Chase Kahn at 12:03 PM