Walter Hill's Streets of Fire ('84) is a self-appointed glam-rock fable - like an 80's music video interspersed with street-gang hoodlum and switchblade, machismo intimidation. 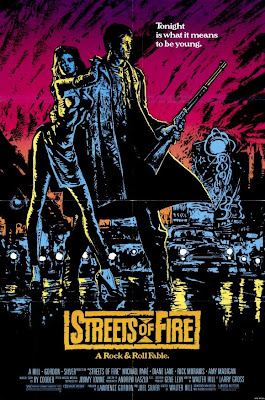 It's got a tough-guy zombie performance from Michael Paré as Tom Cody, a notorious local who comes home to visit his sister and then rescue his ex-flame, a pop-singer named Ellen Aim, played by an 18-year old Diane Lane.

By all means, it's a pretty slight and silly film, but fans of Walter Hill's The Warriors ('79) and 80's VHS culture (like me) will eat it up. The soundtrack, featuring Fire Inc. and Ry Cooder, is a cheesy gold-mine.
Posted by Chase Kahn at 3:42 PM