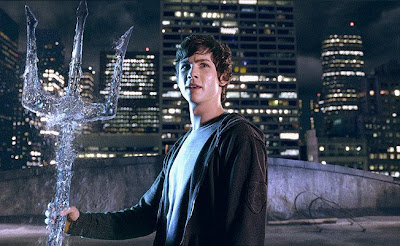 A competently made yet dopey teenage fantasy, Percy Jackson & the Olympians makes no mistake of its intentions - the resemblance to the Harry Potter series both in form and in content is downright blatant.

Yet without half of the imagination, charm, alliterations or jumbled folklore of its obvious influence, it's disappointing to discover that the film rather rudimentarily indulges in the mythology of the pre-disposed variety, simply adding a twist that the Greek gods once partook in a little mortal awakening, leaving overly tan, blue-eyed demigods waiting to be exhumed by the hands of destiny.

Chris Columbus (Harry Potter and the Sorcerer's Stone) was an obvious, safe choice to direct - his handling of potentially troublesome visual effects appears professionally seamless for the most part - but this fantasy just doesn't have a discernible personality or pulse.

From its awkward humor to its mugging supporting performances from the likes of Uma Thurman, Pierce Brosnan and Rosario Dawson, Percy Jackson simply lacks the charm and the British class of J.K. Rowling's multi-million dollar adaptations - what it does have is a bad Vegas drug experience...no, seriously. [C-]
Posted by Chase Kahn at 9:20 PM