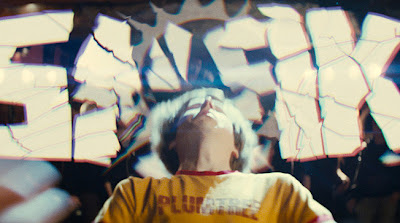 Although it teeters on overkill, Edgar Wright's Scott Pilgrim vs. the World is a manic send-up of video-game culture wrapped in a coming-of-age romantic comedy and also likely the most visually convulsive and daringly unhinged movie-going experience since Speed Racer.

Beginning with a chic, trendsetting 8-bit Universal logo, the film is an outlandish nerdgasm - a battle-of-the-bands arcade button-masher with a cool, hair-shifting Jet Grind Radio chick waiting at the finish line. It's the next logical step in the evolution of Nintendo-cultured entertainment, combining influences old and new and delivered with a few jolts too many, and then some.
Jumping from Super Mario Bros. to Guitar Hero to Viewtiful Joe, there isn't a gamer from the ages of 10-35 that won't get a kick out of the endless references, the deadpan nerdspeak and the swift, joystick fighting scenes - necessary battles between Scott (Michael Cera) and his new girlfriend's (Mary Elizabeth Winstead's) seven evil exes.
Each fight is an exhiliratingly-captured confluence of Street Fighter and Naruto and Wright has fun with his split-screens, his jump-cuts and his level-hopping scene-to-scene transitions. Maybe even a little too fun as a few trigger-happy intertitles and a brief musical interlude would suggest.
I'm not even sure that I bought Michael Cera in this role, or more specifically, that his wild crush Ramona would have anything to do with him or his basement dwelling dweebsters, but to occupy oneself in inaccuracies as it pertains to our world would negate the idea behind a film like Scott Pilgrim - a handy, hilarious fusion between video games and reality. [B]
Posted by Chase Kahn at 8:03 PM