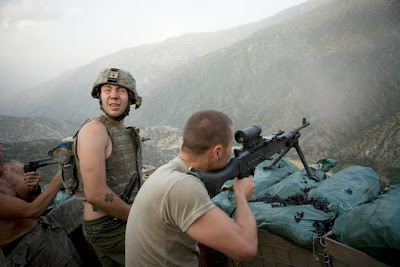 Sebastion Junger and Tim Hetherington's Restrepo is a viscerally charged, startlingly personal down-in-the-trenches war documentary about a small combat team stationed in the heavily contested terrain of the Korangal Valley in Afghanistan.

Beginning with the insurgence and ending with a well-earned trip home, the filmmakers expertly balance hard-edged combat realism with communal peacemaking counsels and brutish roughhousing with quiet, layabout sing-a-longs.

Like a vice, Restrepo wraps itself around its characters until they reach a sense of desperation, angered and cramped by an enemy that seems relentless and yet evasive and indefinite. In fact, by unintentionally concealing the enemy, the frustration mounts both in the viewer and the subject.

The film has drawn much attention for its strictly apolitical viewpoint, foregoing overt statements in favor of a loving, appreciative and brave documentation of a soldier's battle for survival and a grueling depiction of man's struggle between fear and aggression. These men aren't concerned with the bigger ideas and for ninety minutes, neither are we. [B+]
Posted by Chase Kahn at 3:36 PM