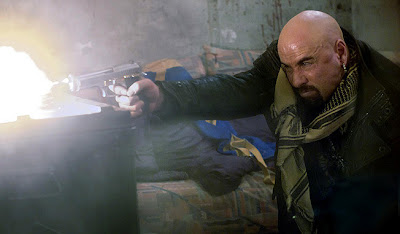 Pierre Morel's Paris-set spy-thriller is high on absurd terrorist plots and low on substance, but overall it's a pretty good time when it isn't playing things too close to the chest.

John Travolta, who played a similarly-styled short-haired killing machine in Tony Scott's The taking of Pelham 123, is actually much better here thanks to favorable material which allows him to play off of his moral ambiguities and always altering spy motivations.

It's when the action ceases to crackle and the plot takes a turn towards solemnity that From Paris With Love oversteps its boundaries and forgets what got it to where it is. It's dim-witted and structurally trying (wait, so what's going on here?) but it finds enough smooth terrain to ultimately recommend. [B-]
Posted by Chase Kahn at 8:44 PM