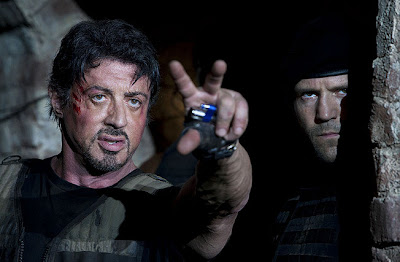 Trying to recapture the glory days of whatever you wanna call those addictive, testosterone-fueled, clumsily plotted and glamorously sleeveless action films of the late 80's and early 90's, Sylvester Stallone seems to be the one remaining gym rat still willing to throw a punch.

It may be the same punch, the same moves, the same fight, but with The Expendables, I believe the 64 year-old actor/director has made a full-on high-energy nostalgic trip through rogue federal agents and Third World locales that, through its dim-witted plotting and gloriously mindless execution, is (whether the filmmakers or the action stars know it or not) a hilarious send-up of all that is (and was) so enjoyably bad about the 80's.
Looking like a mash-up of Commando, The Specialist and The Dirty Dozen, any attempts the film makes to humanize its stock of slightly-aged beef is a bit dull and clumsy, yet once the action kicks up, The Expendables is such a lively and gratuitously explosive brawler that it would seem easy to become offended if it weren't so much fun.
Stallone obviously has limitations behind the camera with his awkward missteps in-between set-pieces and his flat and off-kilter exchanges of dialogue, but once the ball gets rolling and the adrenaline pumping, the film becomes noticeably more distinctive. He's also certainly not one of these spatial composers on the battlefield a la James Cameron or Kathryn Bigelow, but what he lacks in coherence he makes up for in pure, unadulterated glee in the dismemberment of his foes.
There is a sense of disappointment in Stallone's willingness to conform his 80's disasterpiece into a semi-approachable modernized take (fountains of CG blood gush out of his victims like busted pipes and there seem to be too many actors who used to call a wrestling mat their home), but overall, the effect is masterfully sleazy, raw and flat-out mean - if nothing else, it will tide us over until Machete comes out. [B-]
Posted by Chase Kahn at 9:04 PM