So I finally went and saw the new 50th anniversary restoration of Jean-Luc Godard's Breathless the other day and it was just wonderful. The print (which was astonishingly better than that Fox Lorber DVD that I've seen) was apparently approved by cinematographer Raoul Coutard. 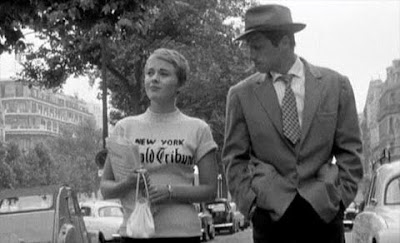 There was only one other person in the theater on a Tuesday at 11:30am, so I didn't exactly get that crowd reaction that I was hoping for, but I was glued nonetheless. Words cannot describe how much I love Jean Seberg in this film, or how I love the endless cinematic references, the way it acknowledges and plays with American film noir, the philosophical tangents.

There's one line I especially love when Seberg is interviewing the author near the end of the film and in response to the question, "what is your grand ambition in life?" he calmly mutters, "I want to become immortal...and then die."

It's the kind of off-hand, philosophically-charged wedge that Godard likes to throw in his films - the story of the painter who paints his wife so accurately the living version ceases to exist brought up near the end of Vivre sa vie comes immediately to mind.
Posted by Chase Kahn at 9:32 PM