I'm off to see Jean-Luc Godard's Breathless sometime this week during its 6-day run at my local art-house theater. Rialto Pictures is releasing a new "restored print" for the film's 50th anniversary this year. Can't wait to see it on the big screen. 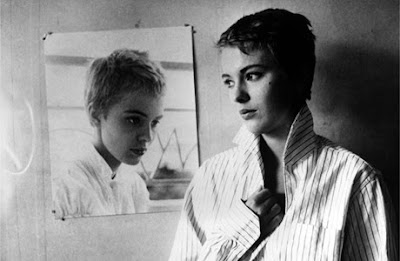 Which brings me to a brief discussion of my favorite Godard films, which would go something like this in order of preference: Contempt, Band of Outsiders, Alphaville, Breathless, Vivre sa vie, Pierrot le fou and Made in U.S.A with Week-end bringing up the rear. (To be honest, I'm not really a fan of those last two).

I haven't seen Le Petit Soldat, A Woman is a Woman, Masculin, feminin, Two or Three Things I Know About Her or anything after La Chinoise for fear of being drowned in all of his esoteric political and philosophical musings.
Posted by Chase Kahn at 10:07 AM