In Burton's canon of well-respected or financially successful films, Ed Wood is the film that feels, on the surface, most like the exception. Firmly rooted in the realm of reality (late studio-era Hollywood) and shot in black-and-white, with an R-rating and without the musical accompaniment of Danny Elfman (all firsts), there appears to be good reason for it. 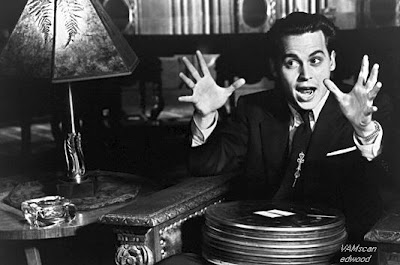 However, in unraveling the life of Edward D. Wood Jr., Hollywood's most gleeful "schlocketeer" and perpetrator of incomprehensibly low-rent productions, Burton has plugged into his trademark personality in a different sort of way, portraying the life and work of his subject with the same kind of pervasive, absurdist sense of humor that occupies so much of his work. In a way, Edward D. Wood's world of delusion, ineptitude and cheap thrills becomes that surrealist, fantastical arena that Burton so lovingly embraces.

Written by USC graduates Scott Alexander and Larry Karaszewski, who were attempting to break out from there designation as writers of strictly family films, Ed Wood was taken over by Burton after a scheduling conflict with Michael Lehman rendered him unavailable. The decision to shoot in black-and-white was frowned upon by Columbia Pictures, who then saw Burton and company jump ship to Disney, where it would be released under the Touchstone banner.

Ed Wood sees Burton working at his most efficient, mature and least indulgent. The humor is biting and sharp, the acting from top-to-bottom is magnificent and the overall result is something that certainly resembles and reveals to be a Tim Burton film, yet is nevertheless more grounded in comparison.

It's hilarious, it's endlessly entertaining and yet, in the end, it's a strange kind of rumination on what it means to be an artist - loyal, dedicated and committed to your vision, whether you're Orson Welles, Stanley Kubrick or yes, even Ed Wood.