Following the enormous success of Batman came perhaps Tim Burton's most recognized, synonymous and accessible of his early films. Largely based on the director's own experiences growing up in Burbank, California, Edward Scissorhands is Burton's most personal, heartfelt and singular of achievements. 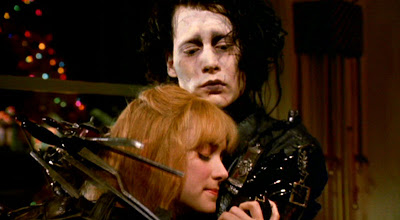 During pre-production on Beetlejuice, Burton contacted novelist Caroline Thompson (who would go on to write Corpse Bride and The Nightmare Before Christmas) to adapt Edward Scissorhands for the screen. Although originally intended to be produced at Warner Bros, the studio sold the rights to the film to 20th Century Fox, and thus Scissorhands became Burton's first film under a different studio banner.

Essentially a gothic fairy-tale fused with social satire, the film examines suburban culture and hysteria through the arrival, or rather the discovery of an unfinished experiment - a young man inconveniently conflicted with scissor-blades of various sizes posing as fingers on each hand. (The inventor is played by Vincent Price, a hero to Burton, and thus, Edward).

As inspiration for the story of Edward struggling to face his affliction and find love and companionship. Burton and appointed scribe Caroline Thompson thematically drew upon classic Universal and RKO horror films like King Kong (1933), The Phantom of the Opera (1925), Frankenstein (1931) and The Hunchback of Notre Dame (1939). From a visual perspective, however, Edward Scissorhands is purely one-of-a-kind.

From the now iconic color palette of Burton's fictionalized suburban neighborhood to the lurking and mysterious mansion on the hill, the film draws upon the director's most obvious visual reference - the contrast of the bold and the pictorial with the pallid, charcoal residue of his characters. 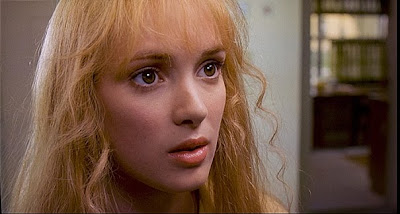 Much like how most of the director's sensibilities and influences on later films can be picked up in Beetlejuice, Edward Scissorhands is perhaps the quintessential Burton film in this regard - not only for its thematic elements, but in the casting of the tormented, confounded and surprisingly loveable title character.

Johnny Depp was an actor looking for a renewal from his teen-choice persona. Fresh off of roles in A Nightmare on Elm Street (1984), Platoon (1986) and "21 Jump Street," Depp was hand-picked by Burton over A-list stars like Tom Cruise and William Hurt. In preparation, the then 27 year-old actor watched a lot of Charlie Chaplin so that he could gain audience sympathy through simple facial gestures and movements.

And although the film is eventually about the inability of society to understand and accept a seemingly inchoate and lesser individual, Edward Scissorhands is a delightfully compassionate, poignant and optimistic work. It's some kind of strange and daintily-shaped masterwork - finely observed, felt and constructed. Burton's sensitivity and relation to the material enlivens and expands upon his visual awareness instead of the other way around.
Posted by Chase Kahn at 3:58 PM