Roman Polanksi's The Ghost Writer (Summit, 02.19.10) is sure to benefit somewhat from the director's recent headlines when it opens in NY and LA this friday before expanding the following week (on 2.26). 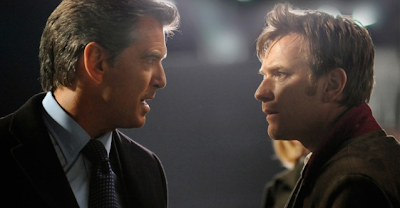 Essentially a one-man investigative conspiracy thriller (think Jack Nicholson in Chinatown), the film has been generally well-received to this point, with Emanuel Levy, Slant's Ed Gonzalez, and Marshall Fine all modestly approving in their remarks:

"Like Scorsese’s “Shutter Island,” Polanski’s “The Ghost Writer” is based on a popular novel – Robert Harris’ “The Ghost.” Like “Shutter Island,” “Ghost Writer” is set mainly on an island off the coast of Massachusetts. And like Scorsese, Polanski uses solid commercial fiction to make a movie that chills and provokes.
"The Ghost Writer" can be frustrating – because you only know as much as the main character right up until the final scene. And when it all becomes clear, all the jagged edges go away and the film comes into focus as the well-honed thriller it has been all along." Writes Fine. 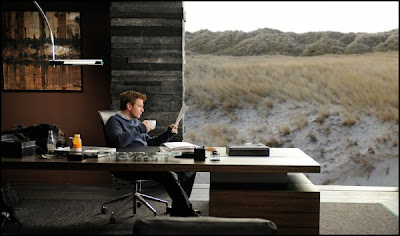 Emanuel Levy shares similar remarks in his review: "Ghost Writer" is Polanski's first contempo thriller in 22 years, since “Frantic,” in 1988, with Harrison Ford, which was both an artistic and commercial flop. Based on the novel “The Ghost” (a better title) by best-selling author Robert Harris, which won the International Thriller Writers’ Award for best novel of 2008, the scenario is co-penned by Harris and Polanski."

"Despite the various shortcomings of “Ghost Writer” in theme and style, the movie deals with political intrigue, disgraced politicos, and behind-closed-doors machinations, turning it into timely and relevant work. And though the setting is genuinely British, emphasizing how the Brits deal with terrorism vis-à-vis the dubious American ICC jurisdiction, the basic situation could apply to other locales and times."
Posted by Chase Kahn at 11:31 AM