For the sequel to the highly successful Batman, Tim Burton was given the liberty of a demotion of producers Peter Guber and Jon Peters to executive producers. Therefore Burton, who disliked Sam Hamm's original two drafts of the script, commissioned Daniel Waters (Heathers) to re-write Hamm's original story, which consisted of the Penguin and Catwoman vaguely hunting down treasure. 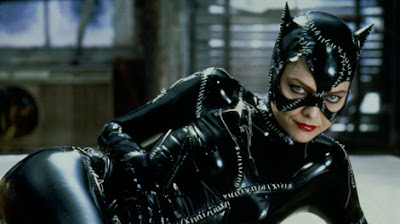 Waters' revision highlighted the scheme of the Penguin to attempt to capitalize on his manufactured pity and run for the Mayor's office, which of course dissolves into a more direct manner of villainy to be resolved at the film's conclusion - an army of penguins, to be exact.

The first misstep contributing to my overall disdain for Batman Returns - which I fully admit is a minority opinion - begins and ends with Bo Welch, who replaces Anton Furst as Gotham City's prime architect. The sets and the design are impressively-scaled and obviously extremely competent, I just don't like them.

Gone are the steamy, art-splattered streets of Furst's Pinewood Studios, only to be replaced by the snowy, wide-open plazas guarded by the conniving towers of business tycoon Max Shreck (Christopher Walken). The effect is like stumbling into a crowded FAO Schwarz on Christmas Eve. 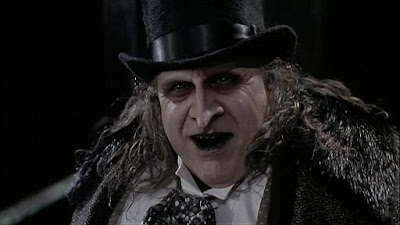 And yes, it remains an appropriate design choice given the origins and seasonal attributes associated with its main villain, but when said villain is an unthreatening, uninteresting and pitiful nemesis, it makes it all the more tougher to swallow.

What Batman Returns boils down to is a muddied, motionless affair with well-respected actors hamming it up to dialogue so bad it transcends tongue-in-cheek comic-page jabbering. There are moments when Michelle Pfeiffer's Catwoman sparks genuine interest in a film that otherwise provides none, but in the end, it proves to be the most tedious and driest of Burton's early films.
Posted by Chase Kahn at 9:28 PM