I recently watched Robert Zemeckis' Back to the Future (1985) and Back to the Future: Part II (1989) for the first time this past week and I liked them. They're fun, energetic, easy-to-watch family sci-fi adventures - deservedly considered to be among the best of a genre so prominent during the 80's (Tron, The Last Starfighter, Labyrinth, etc.). 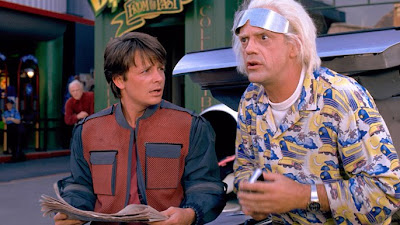 But first off, the thing that I immediately noticed about both films is that they're too long by about 15-20 minutes. Both, in their final acts, turn into an impossible series of events that could potentially threaten or disrupt the flow of time. We know the outcome, yet they just keep on going.

I don't know that the sequel is necessarily inferior to the original - maybe a bit too frenetic and convoluted - but I do know that I like both of them for what they are. They're time traveling movies that make sense - which is all too rare in the days of Kurtzman, Orci and J.J. Abrams.
Posted by Chase Kahn at 11:19 AM