I'm a huge fan of Paul Verhoeven's RoboCop (1987), but his similarly arched and stylized Total Recall (1990), which I watched for the first time today, is a bit of a mess - I didn't hate it, but it just doesn't work all that well. 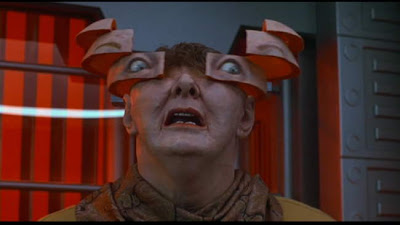 Part of the problem - okay, most of the problem - stems from William Sandell's production design and Erica Edell Phillips' costumes, which render the film disagreeable and blank - a dystopian jazzercise class. For a film set in the future, revolving around artificial dreams and interplanetary travel, there wasn't a set piece (aside from the Mars exteriors) that was visually arresting in any way. Earth is gray and concrete, Mars is slummy and constricted - it's just an ugly movie.

Based on a Philip K. Dick short story, Total Recall, like RoboCop, is about a man who is a product of corporate greed and corruption manipulated to correct a society quickly approaching anarchy. Except Verhoeven, through eruptions of violence and limb displacement, turns his protagonist into a redeemer, not of society's disorder, but the officials (corporate, political or otherwise) responsible for its unruliness.

The difference is that RoboCop makes its political and social jabs concise and clear-headed, and there's real, definable catharsis in the character of Alex Murphy. (Plus a bounty of nice scathing, satirical blows to mass media and consumerism and an added edge of topicality, seeing as how the flailing Detroit depicted here is all too familiar to the one we know now.) 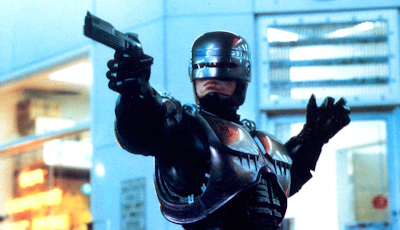 Total Recall ends up being Verhoeven's schlockier, staler companion piece to the superior RoboCop - a fuller and more well-rounded film in every way. The latter's violence is shocking and yet completely earned, whereas Recall's violence (and the film itself) lack a reason to exist, coming off as excessive and repetitious - its like a whore with three boobs.
Posted by Chase Kahn at 7:13 PM