Big-budget Hollywood and Tim Burton made a beautiful couple with the genre-defining Batman in 1989. Production on the script dated all the way back to '85, but it wasn't until Sam Hamm's version (written at the behest of Burton himself) coupled with the surprising success of Beetlejuice, that the project was officially green-lit by Warner Bros.

And so Tim Burton and his pale entourage of weirdos invaded Hollywood in the summer of '89 with one of the most iconic and successful comic-book adaptations to date. Batman, although now re-imagined by Christopher Nolan, was and still remains a re-defining film, not only for the superhero genre as a whole, but for Burton himself, who crossed-over into the mega mainstream with relative ease and comfort without losing his vision and his personality. 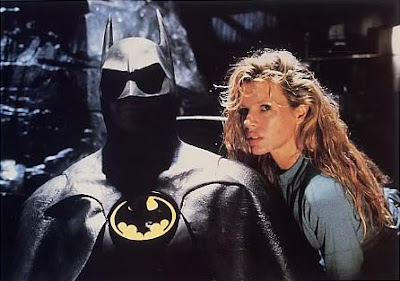 Working in the realm of grand-scale movie making for the firs time, Burton found periods of the production frustrating and problematic. Filming had to be moved from Los Angeles to London to avoid media attention, Sam Hamm's script underwent constant revisions and producer Jon Peters proved to be an active participant in the day-to-day shoot, even changing the climax behind Burton's back to keep Vicki Vale (Kim Basinger) from becoming one of The Jokers' (Jack Nicholson) latest victims.

Regardless of any reported behind-the-scenes turbulence, the film shows no signs of commotion or disarray - in fact, it feels wholly and stylistically like Burton's show from the first frame to the last.

Although Michael Keaton's Batman is tough yet susceptible and Jack Nicholson has fun with his Joker, the real star of the film is the stellar design crew - a seamless and astonishing collaboration between the production, art, make-up and costume departments who bring Gotham City to life using entirely hand-made sets, matte paintings and stop-motion effects. The result is steamy, filthy, glorious Gotham City that not even Christopher Nolan, Wally Pfister and the advantage of cutting-edge visual effects could replicate. 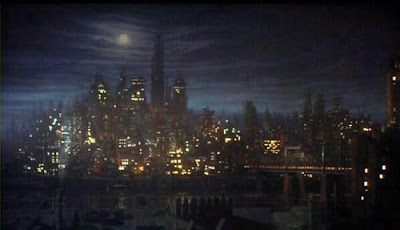 For a 4-month period from '88 to '89, England-based Pinewood Studios was literally transformed into Gotham. Co-creator Bob Kane described his initial feelings towards the design: "I envisaged Gotham the way I see it now at Pinewood. They've got it, every building, every trash can, every brick." At times, the effect of the production exudes the same feeling of and slightly resembles the dystopian streets and skyways of Ridley Scott's Blade Runner - widely regarded as a masterclass in production design.

Anton Furst (production designer on Batman and Full Metal Jacket) described his feelings working with Burton and on designing the city of Gotham: "There was never any problem because we never fought over anything. Texture, attitude and feelings are what [Burton] is a master at." And Danny Elfman, who had to win over some highly skeptical Warner Bros. executives, delivers a flawless, iconic and distinct score - easily on of the greatest feats of his illustrious career.

And although Batman may be light on action and heavy on Prince songs, in regards to translating the atmosphere and the style of comic books to the big screen in an accessible, mass-consumed package - well, no one could say that they've done it much better.
Posted by Chase Kahn at 7:17 PM