As Robert Riskin slowly replaced Jo Swerling as the screenwriter du jour at Columbia under Harry Cohn and Frank Capra, it was perhaps as major a contributing factor to the rise of the director from small studio head to Hollywood icon as any. 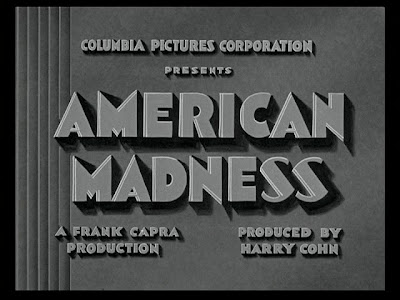 Riskin co-wrote Capra's previous hit, the newsroom screwballer Platinum Blonde (1931) with Swerling a year prior, but on American Madness, it was Riskin's first solo screenplay for Columbia's most successful director and the beginning of a most noteworthy Hollywood marriage of writer and filmmaker. (The two would clater collaborate on It Happened One Night, Mr. Deeds Goes to Town, Lost Horizon, You Can't Take it With You and Meet John Doe.)
But perhpas the biggest achievement of American Madness is its successful merging of topical politics and old-fashioned entertainment - a trademark of Capra's most prestigious efforts.
-
Shooting on a budget, Madness takes place almost entirely inside a bank, which is owned by Thomas Dixon (Walter Huston) who is no ordinary banker. In the midst of the Depression, Mr. Dixon isn't concerned about profits, but helping keep small businesses afloat by handing out loans that no other man worth his pocketbook would even consider. He's the exception in a time of crisis and misfortune and thus is ripe for the ever optimistic Frank Capra's tale of triumph amidst tragedy.
- 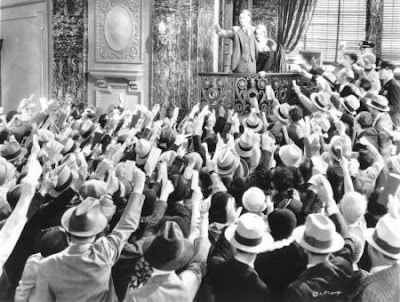 Riskin's screenplay was evidently inspired by the real-life acts of Bank of America's similar views on taking risks for the greater good during the early years of the Great Depression. But Madness isn't just a bludgeoning of goodwill delivered with studio-age directness and fatigue. Capra, like he did with Platinum Blonde, does a marvelous job of opening up Mr. Dixon's bank, throwing in humor, romance, melodrama, and even crime.
Though plainly exuding political stance, the film thankfully sidesteps optimisic mawkishness by deftly delivering a message movie that doesn't drown in its own politics. Although, perhaps the greatest feat of American Madness is the way it set-up what was to come and the way it would influence the films of Frank Capra throughout the late 30's and 40's.
Posted by Chase Kahn at 7:44 AM