No, Not Ghost Rider.

I missed Hollywood Elsewhere's Jeff Wells' rave of Roman Polanski's The Ghost Writer last night, but it sure caught me off guard this morning. Polanski's investigative one-man thriller was picked up by Summit a few weeks ago or so in an attempt to cash in on the man's recent headlines, but the consensus is that it's pretty darn good, or in the words of a few, magnificent:

"Roman Polanski's The Ghost Writer...is a brilliant and masterful adult thriller. I just saw it this evening, and less than ten minutes after it began I knew I was once again in the hands of perhaps the most exacting filmmaker alive today, as sharp as he's ever been. The film is so gloriously not run-of-the-mill-Hollywood I can barely stand it. 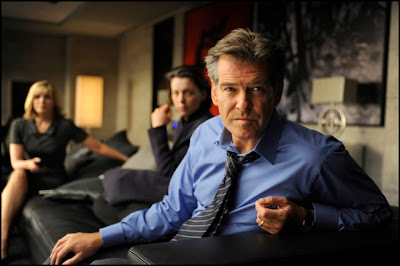 "The same calmly intelligent approach to sory - the sharp dialogue, subtle hints and clues, exacting narrative tissue, patient accumulation of facts and intuitions - that characterized Repulsion, Rosemary's Baby and Chinatown are here in abundance."
-
"The Ghost Writer delivers a kind of heaven that smart moviegoers will flutter over. It has a sense of artified refinement that out Chris Nolan's Chris Nolan."
Of course, it should be noted that Wells is a Polanski apologist through-and-through (even outside the realm of film), but nevertheless, overall response has been greater and friendlier towards The Ghost Writer than to Martin Scorsese's Shutter Island. Go figure.
Posted by Chase Kahn at 7:13 AM